Events and News » Who We Are

Massachusetts State Rep. Paul Mark will tell you that climbing a telephone pole as a line technician comes first on his resumé before “attorney” or “legislator.”

Without tuition reimbursement collectively bargained with his employer, Verizon, the member of Worcester, Mass., Local 2325 might never have been able to obtain five college degrees.

Without union members knocking on doors, Mark, age 34, might never have been elected to office in 2010 to represent an expansive district in the state’s northwest, encompassing 22 communities, rural and urban.

Without union roots, Mark might just have been another pol, lacking the firsthand knowledge of the issues in the hearts and on the minds of his constituents, like proposing innovative ideas to make college more affordable. That’s one of his missions as the vice chairman of the Joint Committee on Higher Education.

His grandfather and father were union members. Young Paul had even worked hustling hotdogs at Fenway Park at age 16, paying dues to UNITE-HERE.

But it was on the picket line, six months after his hiring by newly-formed Verizon, where Mark says, “I learned why this union thing mattered.”

The company, formerly Bell Atlantic, was seeking major reductions in health insurance and pension benefits. Then 21 years old, he 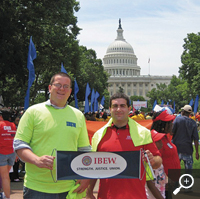 says he was inspired by “men and women older than me who were willing to go on strike and sacrifice everything they had to protect their health care benefits and job security.”

Mark, a Massachusetts native, made the rounds of telecom locals in Massachusetts and New Hampshire after being hired at age 20 as a temporary worker in Manchester, N.H., and completing his technician training in 2000.

In 2002, he threw himself into Manchester, N.H., Local 2320’s campaign opposing right-to-work legislation in the state and saw the true value of grassroots organizing. “We won a tangible victory,” he said. Later, Mark organized a robust political program as chairman of the COPE Committee of Local 2325.

While working full time, he earned a bachelor’s degree in economics from Southern New Hampshire University in 2005, then a master’s degree in labor studies from the University of Massachusetts Amherst.

Figuring he could win more grievances as a shop steward if he had a law degree, Mark enrolled in the evening division of Suffolk University’s Law School, graduating in 2009. “I found winning wasn’t really that simple,” he says.

In 2010, Verizon instituted another reduction in force, and Mark, who had begun his run for legislative office, took a buyout and left the company.

Mark’s interest in politics was first fueled at age 8 with a handshake from Massachusetts Gov. Michael Dukakis during his run for the presidency. “I was so disappointed when he lost,” says Mark, who, at 16, volunteered for Bill Clinton’s re-election campaign.

“Paul is a solid union man who went everywhere and anywhere when there was work to be done,” says Bruce Lambert, a former Springfield, Mass., Local 2324 president, who worked with Mark, encouraged him to run for office and directed his campaign. Mark’s union roots helped drive his winning message.

His grandfather, Paul, was a Boston Local 103 electrician. His father, Paul Jr., had worked as a Teamster before the warehouse where he worked shut down, leaving the family in some tough times. Better times came when his father went to work for Bell Atlantic and later Verizon, joining Local 2320.

“It’s a testament to Paul’s leadership that he won his first race, ran unopposed for his second and looks to be running unopposed for his third term in November,” says Lambert. “He’s got the admiration of a lot of people and you’ll be hearing a lot more of Paul in the future.”

In one of Mark’s first votes, he was one of only 40 Democrats out of 130 to vote against changes to the state’s pension plan that he felt were unfair to workers.

“There simply aren’t enough union members running for office,” says Mark, who is dismayed that the assertions of corporate lobbyists often go unchallenged. “Workers have an important story to tell. More of us need to be involved.”

“Some think tanks say the answer to budget problems is to get rid of employee benefits and shift the burden onto the backs of public workers, but all that really does is take dollars out of the local economy,” he says.

Mark says he is encouraged by recent developments. The election of Boston Mayor Marty Walsh, a union member, shows the promise of unions pulling together.

“It’s becoming clearer that tax cuts and corporate giveaways are simply not creating jobs,” he says.

Mark has co-sponsored a bill to require companies that are closing or merging operations to consider selling their businesses to employees.

“Paul is smart. But he is also wise. He’s loyal to his friends and brave in his votes. I am so proud to be his colleague and his friend,” says state Rep. Denise Garlick, a former president of the Massachusetts Nurses Association who is vice chair of the Joint Committee on Education.

Mark advises members who want to run for office to focus on issues wider than the immediate concerns of unions.

“We need to proudly display our unionism,” says Mark. “But it’s only one piece of who we are and what we should be concerned with.”