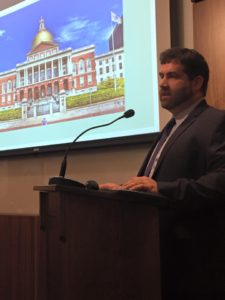 Paul Mark has dedicated his life to exceeding expectations through hard work and perseverance. His philosophy has been shaped by his blue-collar background, his strong commitment to family, and his passion for learning and education.

When Paul was young his father was a Teamster working in a warehouse while his mother stayed home, devoting herself to raising Paul and his younger sister. In Paul’s early teens, the warehouse closed down, leaving the family unemployed and struggling to hold on to their dreams. His family pulled together through the hard times and never gave up; each member doing everything they could to secure a brighter future.  Paul never forgot the lessons of the bad times and dedicated himself to preventing others from experiencing such devastation.

Paul secured full-time employment with Bell Atlantic at the age of 20 and immediately joined the IBEW. Six months into working at the phone company, the members of IBEW went on strike against the newly renamed Verizon to retain health care benefits and job security. Paul, having learned much from his co-workers during this time, became involved with the union. Paul held many union offices at a young age, including COPE director, Press Secretary, Executive Board member, Central Labor Council Delegate, and Union Steward.  He remains a dues paying, card-carrying member of the IBEW and the Massachusetts Teachers’ Association today. His experiences also cemented his involvement with politics and government, which he had been interested in since he was a young boy.

Paul resumed his studies by re-enrolling at college in the evening while continuing to work full-time during the day. He earned an Associate’s Degree in Telecommunications from Springfield Technical Community College and a Bachelor’s Degree in Economics from Southern New Hampshire University. His passion for education and the opportunities which came along with it only increased the more he learned, causing him to enroll in both a Master’s Degree program at the University of Massachusetts Amherst and the evening division of Suffolk University Law School in the fall of 2005. Paul commuted back and forth across the Commonwealth from work in Pittsfield to Boston for law classes three nights a week while continuing to work full-time at Verizon and completing his UMass studies. In 2007 he completed his Master’s of Science and immediately enrolled in Northeastern University’s Law and Public Policy Doctoral program. Paul graduated from Suffolk Law in 2009 and Northeastern in 2010. His Doctoral dissertation is entitled, “Predicting Labor Law Reform”, an analysis of why the Employee Free Choice Act would not pass the 111th Congress in spite of Democratic majorities in both houses of Congress. Paul took and passed the Massachusetts Bar Exam in July 2009 and was sworn in as an Attorney at Faneuil Hall in Boston on December 2, 2009.

Politically, Paul has been involved in many aspects of campaigns on all levels of government. Paul first volunteered at the age of 16 to work for Bill Clinton’s re-election and the Jeanne Shaheen for Governor Campaign in New Hampshire. Through the years, he has served in many roles ranging from volunteer to top advisor for several state, local, and federal candidates.  He has interned for Barack Obama for President and drove with the Secret Service for Bill Clinton as part of a Presidential Motorcade. He has served as Chairman of a state level Political Action Committee, marched on Washington for health care reform, experienced direct democracy in the form of the annual town meeting, organized and was elected Chair of his Town Democratic Committee, and has served as a delegate to the Democratic State Convention annually since 2005.  Paul was the first elected official in Massachusetts to endorse Bernie Sanders for President in 2016.  Paul served as Co-Chair of the Bernie Sanders for President Campaign in Massachusetts and was elected as a delegate to the 2016 Democratic National Convention in Philadelphia.  Paul served as a member of the 2017 Massachusetts Democratic Party Platform Committee.

Since taking office, Paul has been an outspoken champion for his district and a strong advocate for the progressive, working class issues important to all of us.  He has maintained his core values of working hard, standing up for what’s right, and expanding opportunity for all throughout his time in office.  He has taken the lead fighting for important funding that has achieved substantial results in the region, including the Opioid Task Force of Franklin County, the Franklin County Advanced Manufacturing Training Program, the Berkshire County Opioid Task Force, Veterans Mediation Training, Higher Education Programs, Transportation investments, and many local building and economic development projects throughout Berkshire and Franklin Counties.  He has been a leader on fighting crippling student debt, supporting working families, improving business opportunities and economic development in our rural area and throughout Massachusetts, protecting our environment, and getting money out of politics.  Paul has served on the Joint Committee on Environment, Natural Resources, and Agriculture, the Joint Committee on Mental Health and Substance Abuse, the Joint Committee on Tourism, Arts, and Cultural Development, as Vice Chair of the Joint Committee on Higher Education, as Vice Chair of the Committee on Rules, and as Chair of the Joint Subcommittee on Student Loans and Debt.  Paul currently serves as Chair of the House Committee on Redistricting, Co-Chair of the Rural Caucus, and on the steering committee of the Public Higher Education Caucus.  Paul is currently the House appointee to the Rural Policy Advisory Commission and previously served as the Massachusetts Governor’s designee to the Vermont Nuclear Decommissioning Citizens’ Advisory Panel. He has completed both the Council of State Government’s Robert Thompson Eastern Leadership Academy and the prestigious Henry Toll Fellowship program. Paul currently serves on the Council of State Governments Executive Council for the Eastern Region as the Massachusetts House Designee.

All of these experiences have shaped the man who now serves the 2nd Berkshire District in the State Legislature. His tireless dedication to hard work and helping others continues in the State House.